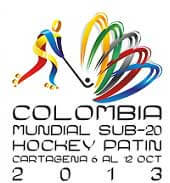 A Game Of Two Halves

England had a very poor first half performance. The players were too relaxed in their defence and did not react quickly enough to create the necessary counter attacking opportunities which would have been the easiest way to beat the box/diamond defence system of South Africa.

The game became even worse after we took a 2-0 lead and then allowed South Africa the the opportunity to come back into the game.

At half time I spoke to the players about their attitude. I asked them to pressure the South African team 3/4 of the rink. This would then give us the opportunity to look for good counter attacks. The team had to be patient whilst attacking the South African zone defence and ensure that they made at least a few passes prior to an attack on goal. These instructions were followed very well by the players and we performed much better, as the second half score of 6-0 shows.

We finished 11th, which is the same position as two years ago, but during this competition we played much more consistently and showed improvement in our competitiveness. As I mentioned in my report on the last game, we felt that we could have been playing in the top eight if the calendar had not been too complicated for us. 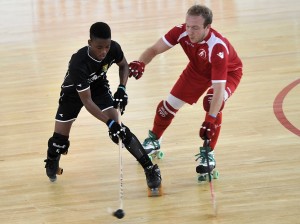 Other Results From Day 8

This game will remain in my memory for years to come as an almost perfect England performance against a very strong team Brazilian team. Three of these Brazilian players were part of their senior team that finished 6th in the Senior World Championship Group A, which took place in Angola a couple of weeks ago.

I couldn’t be more pleased with our players as they took evry word I said in the tactical meeting and employed them in the game. England played very well with man to man restricted, being more patient and forcing Brazil into making mistakes in their attacks and therefore giving us opportunities to counter attack.

With a perfect first half performance in both defence and attack, our players didn’t let Brazil’s best players perform and we were always there for the second tackle and we maintained good ball possession.

We continued to play well into the second half, however with four minutes left on the clock, we were very unlucky in the way the game then went. We could have “killed off” the game at 4 – 1 as we had five great opportunities to score including hitting the post, but instead we conceded making the score 3-2 . After Brazil’s second goal we created another three good goal scoring opportunities which we just didn’t put away and we paid the price. We were unlucky and Brazil had the good fortune to score two goals, one of which was an own goal, to win the game.

The down side of this game was the bad quality of the referees. England were more penalised throughout and this certainly did not help our cause.

This game was better than some of the quarter final matches and both England and Brazil definitely performed to justify a top 8 finish in these World Championships, however the calendar was not in our favour. 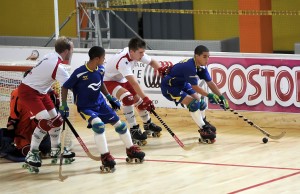 Other Results From Day 7

England had a poor performance in the first half. Defensively the team played as discussed in our tactical meeting, as we pressured up to the half way line, stopping the Israeli team from gaining useful ball possession. However in attack England were not patient enough and didn’t circulate the ball enough. We played around the Israeli team too much and missed too many opportunities of passing into the man in front of the goal.

At half time I had a long conversation with the players concerning their attitude in the first half when attacking. I explained that we had to keep ball possession, look for screens and for our set up moves.

Israel were very organised in defence which caused us a lot of problems all game. Although we dominated the game and had a few shots against the post and bar, we couldn’t find a way through to score and the game finished in a draw, meaning extra time.

During extra time we continued to dominatie the game as we had most of the second half, but we just couldn’t get past their goalkeeper. Finally we created an opportubity, with our winning goal coming from a set up move.

Brazil and England are the best two teams in the bottom nine and the result tomorrow will move one of the teams to play for 11/12 places. 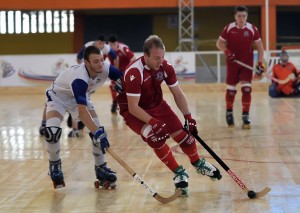 Other Results From Day 6

The group phases of the Championships have now completed and England have finished third in their group, behind Spain & Colombia.

All teams are on a rest day today and the matches start again tomorrow at 10am local time (1600 BST), with England on first match against the team from Israel.

The winners of this match will progress to a further match to be in with a chance of playing for 9th/10th place.

After the heavy goalscoring that took place on the first day of the Championships, it has been agreed that this situation should be avoided in further games. The organization circulated a document asking that all the countries respect the weaker teams in these Championships and to promote the idea of “fair play”.

England took the decision to play this game as fair as possible and to not put any pressure on a very young Macao Team. Before making any attempt to shoot at the Macau goal, the team passed the ball between all the players taking as long as possible, whilst incorporating the 45 second possession rule.

At half time the score was 10 – 0 in England’s favour and so I asked the players to keep an eye on their scoring, as we didn’t want to score more than 14 goals. This is not the best way to promote our sport as this became a boring game. An ideal situation would be to split the teams in two groups, such as A & B as already employed in the Senior World Championships

A big positive for England is the fact that we have gained a lot of respect in our sport and England have been named as one the strongest teams in the competition. We have definitely shown the quality to be one of the top 8 teams, but unfortunately we were drawn in the hardest group of this competition.

Just as a final note, yesterday Colombia lost 3-2 to Spain in a great game that could have gone either way. This highlights how well England did in their respective matches against these teams 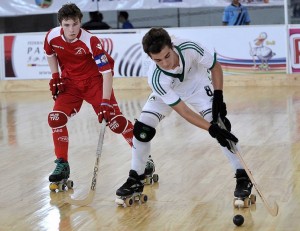 Other Results From Day 4

The Score Didn’t Reflect The Game

The local press have considered this to be the best match of the u20’s competition so far.

As I told the players in the tactical meeting, this game would be decided on details; the team that made the least amount of mistakes would eventually win the game.

Although we played consistently for most of the game, with the players showing a lot of passion and play for each other, we were simply undone as we conceded early goals in each half. The team defended well with our system of man to man restricted, pressuring the man with the ball. However at times the team defended too deep, which allowed Colombia the space for long shots. Colombia took advantage of this opportunity, scoring two goals early in each half.

These four goals were ultimately the small difference in the game. Without these, we could have won this game against one the best teams in this competition.

I am pleased that England played a very competitive game which is an area of the game that we have been working on and again, as yesterday, our good ball possession forced the opposition into committing 13 team faults. 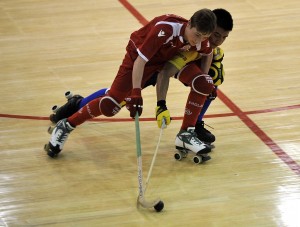 Other Results From Day 3

Superiority In All Areas Of The Game

England started the game by pressuring half rink to ensure that Uruguay could not have ball possession. This pressure culminated in a good start for England with two goals. After this great start, the team then lost concentration and the players became too individual, which allowed Uruguay to come back in to the game pulling the score back to 2 – 2

I called for a Time Out straight away. The players were again told to focus on the game and to ensure that we had a player around the goal area to cause problems to their box defence system.

The players understood this message and the team went back to playing more consistently in defence, enabling them to break away with good counter-attacks and meaning we maintained a lot of ball possession. We scored three goals but we could have easily scored a few more.

In the second half we controlled the game and as we had another game in the evening against Colombia, we were able to rotate the players constantly . 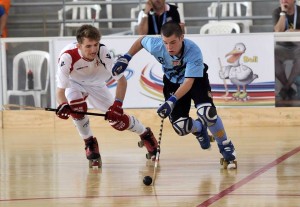 A good win, but now we expect a very hard game against Colombia to decide second place in the group.

A Better Game Than The Score

England started the game with man to man restricted, pressuring the man with the ball which succeeded in stopping Spain creating many opportunities to attack our goal.

Although we didn’t manage to create enough counter attacks ourselves, most of the first half we had good ball possession culminating with Spain being ending the first half with eight team faults.

We started the second half with a good five minutes of controlling the game and during which we scored our goal. However, the last five minutes then saw us lose control of the game and we conceded five goals, including two penalties and a direct free hit.

It was very hot in the stadium with high humidity making the game very difficult for both teams, though it was more noticeable in our team. The referees had to stop the game a few times so that the players could drink water.

The positives to take from this game were the passion that the players showed and the way they played for each other. The respect that Spain showed us in the game was reflected in the twelve team faults they accumulated. 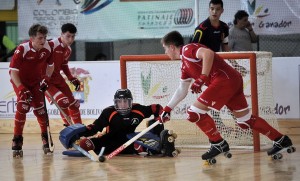 Other Results From Day 2

The England Under 20 Team is participating in the World Championships which take place in Cartegena, Colombia from Saturday 5th October until Saturday 12th October.

The team travel from Heathrow at 730am, on Friday 4th October heading for Frankfurt, before their long haul flight to Bogota. Then an internal flight will take them to Cartegena where they will represent England in the 6th u20’s World Championships.

With 17 participating Countries it will be a great spectacle for the sport and England will be hoping to improve on their 11th place finish in the 2011 World Championships in Barcelos. 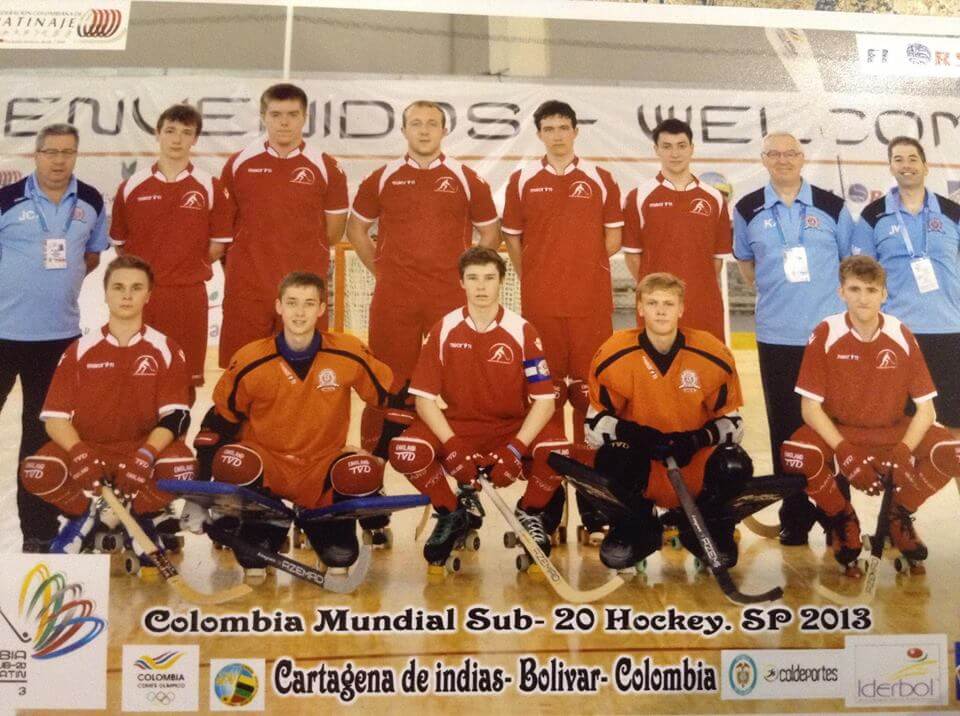