England dominated in all areas of this game.

Defending full rink pressure, Andorra never caused any problems to England and we had lots of good attacking moves and created a lot of goal scoring opportunities.

We managed to have a comfortable win, however we were still missing a lot of the goal opportunities and direct free hits.

Overall, I am pleased with the performance of England showing great dynamics in both defence and attack.

England were considered as one of the surprises of the competition as we were very competitive, with only two teams superior to us – Portugal and Spain. 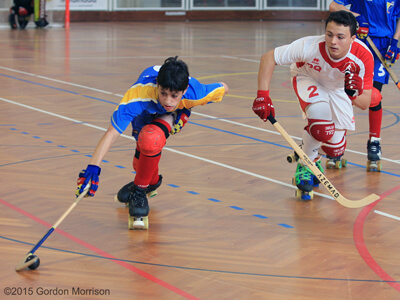 What let us down most were the missed goal opportunities with our players showing a lack of confidence in front of the goal. It is also not normal to miss “15 direct free hits and 2 penalties throughout the whole competition“.

If we had managed to score 30% of our goal opportunities we would have been finishing 3rd or 4th in this competition, The dynamic and competitiveness of the team was there, it was just the finishing that let us down.

This proves that the new methodology of training introduced last year is showing progress at international level. England having more ball possession and defending as soon we lose the ball in attack to delay the other team’s attack and forcing them to make an error.

Now we need to work on finishing in front of the goal and to practice direct free hits and penalties as part of the training plan.

Congratulations to Portugal who won the U17 European Championship after drawing 1 – 1 with Spain, who finished second.