A Close Match Decided By A Direct Free Hit
In the last four years France, have finished in the top four places in the Under 17 European Championships, so therefore we knew this would be a very difficult match.

As we are becoming more competitive, I decided to change the tactical system. As soon as our players lose the ball in attack, one of our player’s pressures the man with the ball full rink to ensure that we can delay their attack and to force them in to making mistakes. The other three players come back in defence, forming a triangle.

In the first half both teams defended well creating counter attacks which culminated with goal scoring opportunities. England had more ball possession but couldn’t score. 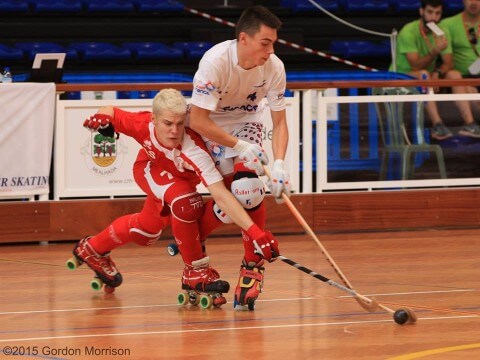 In the second half England were far superior and conceded the only goal of the match from a direct free hit, which was actually an incorrect decision by the referees.

After their goal we took control of the game by pressuring France full rink and creating good goal scoring opportunities. During this period we hit the post twice and missed a direct free hit.


The only negative point to mention is that our team didn’t have as many shots on goal as I would like to see. The players have to understand that we need to shoot more often with one man in front of the goal to have more chance of scoring.

I would like to say that a draw would have been a fair result and if one the teams deserved to win the match, then it should have been England.

I have received a lot of text messages and emails from people in England, Portugal and Spain with positive comments regarding the England performance and how unlucky we were.

Tonight we are playing Spain at 19:00 hours.