A bad first five minutes in each half

Andorra were one the strongest teams in this competition with players playing at high level as they play in a strong Cataluna League as a team.

The objective for this game was for England to play the same strategy as against Angola, however we had a very bad start conceding two goals in the first three minutes. 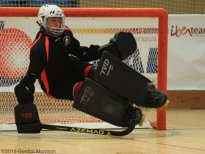 I had to call a time out to calm the players down and to correct their positioning on the rink when defending.

At half time I told the players how important it was that they score a goal in the first five minutes to put Andorra under pressure.

Again we had a bad start and it was Andorra scored a couple of goals in the first five minutes of the second half.

The English players showed passion in the last seven minutes even when 7 – 1 down. They start to gain control of the game pressuring full rink and creating many goal opportunities.

We scored three goals and hit the post four times as well as missing a direct free hit.

We felt by the end of the game that had we been focused all game then we would have had a good chance to win.