We were playing against a strong team, so therefore we changed our tactics for this game as Angola are very fast players as well as competitive with a few players playing in both Spain and Portugal.

England played restricted man to man to explore the counter attack and to force Angola to play outside of our restricted area. This way we controlled the game and we started to gain good ball possession. 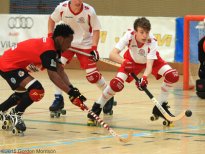 I also asked the players to be more aggressive when attacking using long shots with a player in front the goal.

All worked well in the first half and the half time score was deserved.

We started the second half in control the game and we were very unlucky not to score. Then Angola scored a goal from one the few goal opportunities that they created.

The game finished 2 – 2 at full time and so we went into a golden goal situation.

I asked the team to play a three man carousel and to keep one man in front of their goal at all times meaning that we managed to keep possession of the ball. Our goal came from a long shot from near half way line with the player in front of the goal scoring the winning goal.