In the first half our team never gained control of the game. Defensively we were consistent, however the players didn’t pressure man with the ball to the half way line as they have been asked to do.

Our players didn’t move off the ball enough, rarely sprinting into the area for a goal opportunity or into space to create a pass or pass line, therefore the player with the ball kept hold of possession for too long. 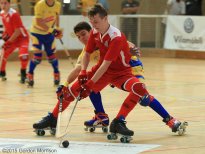 The first Colombian goal was from an incorrectly awarded direct free hit as our player never touched their player.

We went into the break on level terms at 1 – 1. The team started the second half very well, showing more aggression in defence and attack and it was not surprise when we scored to lead 2 – 1.

Then refereeing decisions turned the game around, we felt that we were playing against two teams.

However the overall comment is that England could play better and the players have to understand that at this level and considering that we are a lot more competitive than in the past, these games will be decided by details.

Our next match is against Germany on Tuesday 22nd September at 1:30pm English time.