After India lost 11 – 7 against Germany, I asked the players to really concentrate in this game.

England played with good dynamics in both defence and attack against a team that used a box defence system all game. 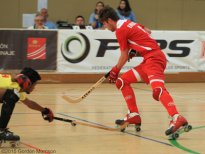