This was a game that England dominated most of the areas of the game.

We pressured full rink and got a lot of ball possession.

We had a lot of counter attacks due to our consistent defensive system. 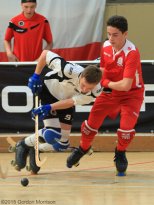 One of the main areas of the game that let us down was the many goal opportunities that we had and couldn’t score from. Most of the time this was due to nerves in front of goal as well as some great saves made by the German goalkeeper.

The other problem was the lack of long shots, which has been our problem during the competition.

The team lost all three games in one the hardest groups of the competition, however we were very competitive and very unfortunate when it came to scoring goals.

The refereeing was excellent.