A Great First Half

Our preparation for this game was mainly to be very consistent in defence pressuring the man with the ball to the half way line. Also, we needed to be patient, helping each other and to force the Spanish team into making mistakes.

In the first half the players followed the instructions to the letter which helped to create great goal opportunities in our counter attack movement. 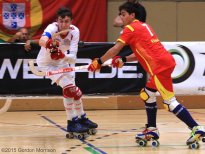 After Spain scored to lead 1 – 0, we took a time out. After this time out England matched Spain for the rest of the first half and during certain periods dominated one of the favourites to win this competition.

It was no surprise when we levelled the match at 1 – 1, as England were in control of the game at that point. Our defence were initiating great counter attacks from which we deserved a couple of goals before Spain scored from the only mistake made by our defence in the first half, to lead 2 – 1 at half time.

The second half was very difficult as our team showed tiredness mainly due to playing against a very competitive team with a few players that are playing in the Spanish Seniors Premier League.

More important than the result is the fact that Spain had to work very hard to win the match. We proved that we are going in the right direction to keep our objectives for the competition.

We are resting today and then we play Colombia on Monday 21st September at 12pm English time.