After the very poor performance against Israel, the players reacted very positively to my comments, by approaching this game in a strong and positive manner.

The performance in this match was more in line with the level of ability (both tactically and individually) that we know the players are capable of.

They reverted back to the system we played in the first three games of the competition, restricted man to man pressuring the man with ball circulating the ball prior to attacking the goal with three man and lateral carousels. 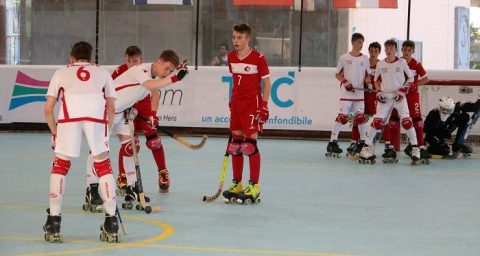 Playing this system gave us control of the ball which let us take the lead in the game. However at half time the score was level at 2 – 2. Unfortunately the Swiss goals came from defensive errors in the area through not clearing the ball to the sides, which is the safe way to initiate an attack. Instead the players tried to transport the ball directly towards the opposition.

In the second half a similar mistake in our defence put us down 2 – 3 and then again 3 – 4. However the players reacted well to this and we re-gained our composure in the game and fought back to be level at  4 – 4 in the last two minutes of the match.

One area of our play that is letting us down during the competition is the stopping of the long shots. Unfortunately one of the consequences of this was losing our captain earlier in the second half through a long shot that hit him on the thumb whilst in front of the goal marking a player. This put him out for the rest of the game having scored our three goals up to that point.

Although four of the Swiss goals were down to our defensive errors, their fifth goal in my opinion was a mistake by the referees.

With 80 seconds left on the clock, we were on 9 team fouls and two incidents then cost us the game.

The first one was our player being hooked. This should have have resulted in a blue card to Switzerland and direct free hit for us. This was missed by the referees.

The second one was the ball was kicked by the Swiss in their penalty area which should have been a penalty. Within the same incident our player was pushed against the goalkeeper and the referees gave the 10th foul against us. It was this mistake that decided the game, as Switzerland scored the winning goal from the resulting direct free hit, with only 18 seconds to go.

“I think we played well, worked hard for each other and I am looking forward for next year’s competition”