England approached this game in a positive manner showing confidence and starting very strongly, scored within the first minute. 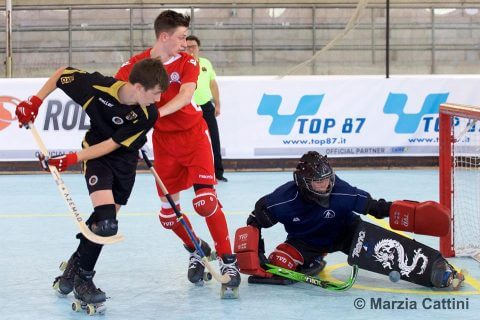 During our tactical meeting I had explained to the players that they had to play this game in the same way as our previous match against Italy. Our restricted man to man and pressuring the ball enabled us to initiate good counter attacks scoring an early goal. Although after this goal the team seemed to lose some of their focus and this allowed Germany to equalise, making the score 1-1. I then called a time out to ask the players to take more control and to retain ball possession. For the rest of the first half we controlled the game not allowing Germany any opportunity to penetrate our goal. It was nice to see the players going forward with confidence and using moves that we had practiced during our preparation. We created many opportunities from our counter attacks and set up moves from both three man and lateral carousel and meant that we were unlucky not to be further ahead at the break.

The team started the second half just as they had in the first half with an early goal again. We kept our focus in the game, remaining in control throughout which allowed us to go 5 – 1 up with seven minutes to go.

Germany called a time out and then applied full rink pressure, I then instructed players to retain possession of the ball using the 45 seconds rule to slow down the German attack.

England held them very well and were unlucky to concede a late own goal.

“ Now we have put our mark on the competition with a good win and we are looking forward to continuing our form for the rest of the competition. As I attended the last Europeans in Spain I feel this competition more competitive and excited.”

“ We didn’t have a very good first half, however we improved our dynamic in the second half showed by the final result. This competition has been very intense and exciting not giving time to relax, very good competitive games.”