The outcome of this game has to be seen more for the attitude of the team than the final result.

In the first half the team play was consistent in their restricted defence pressuring the man with the ball, to stop the long shots, which helped us to create some good counter attacks.

We had good ball possession and the penalty that we missed would have meant that the half-time score would have been 1-3.

In the Second half the team showed a lot of tiredness, which can be seen as result of fitness levels. However I have to say that the team’s tiredness was caused by a lack of competitiveness. 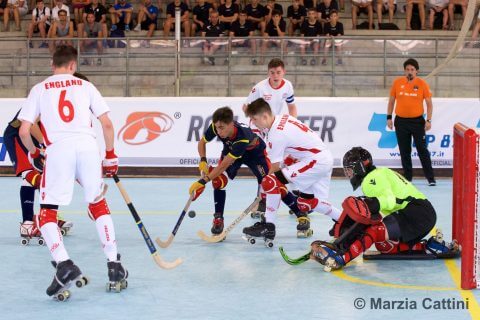 The high temperature didn’t help and although the team never lost their focus, the five goals in the second half were due to the individual abilities of the Spanish players.

The total of 17 team fouls during the game demonstrated our commitment to regain control of the ball. Most fouls were due to our players strong defence between the Spanish players and our goal.

So another thing to take from this game is the fact that our skating ability is improving massively compared to when we competed several years ago. What we need to do now is to have more competitive games for players in the Premier League. Therefore, our players competing for selection in the future need to play at a Premier League level.

Spain are the European Champions and their players are at different level regarding all areas of the game.

“I thought we defended well during the game. Regardless of the score I feel we competed well with the Spanish players. A much improved performance to when we played in Mieres, Spain last year”.