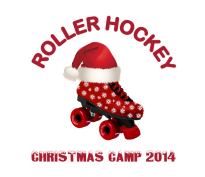 I was very pleased with the success of this year’s Christmas Camp regarding the numbers (56 players) and quality of training, as well as the commitment the players during the four days.

The camp was split into two groups:

The objective of the camp was achieved with all players improving day by day, which was obvious after the second day when watching the games, especially with the younger players (Group 1) having good team play.

The players in Group 2, most of them part of Project 2015, showed that we are improving our roller hockey and making it more competitive.

Awards of the Camp:

Players of the Day:

I would like to thank the coaches Arthur Corr, Belinda Mason, Carlos Cardoso, Joe Wheatley and John Fotiou and the assistant coaches Alex Mount, Carl Owen, Ed Mount, Scott Neville and Will Rawlinson for their great assistance with coaching over the four days.

Finally I would like to thank Michaela Parfitt for co-ordinating the camp and the helpers that assisted her, Lucy Rawlinson, Hayley Hall, Harry Parfitt, Kasia Parfitt and Rees Parfitt for the great job done off the rink.