As part of the continual development of English roller hockey we organised a trip to Feira, on the same basis as those we have completed over the last seven years, to carry on with the preparation of various age groups and culminating in our participation of the Feira Easter Tournament.

The trip was split into two groups, Project Vision 2020 and Project 2017, involving a total of 89 people including players, staff and parents. 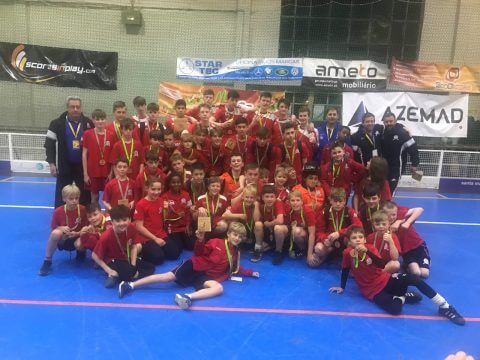 Project 2017 consisted of the Under 17’s Reduced Squad with a total of 16 players, as part of their preparation for this year’s European competition. They arrived on Wednesday 12th April and returned to England on Tuesday 18th April.

The main objective on this trip was to participate in the Easter Tournament in Feira which is jointly organized by Feira Council, Club Academico da Feira and the NRHA.

With the exception of the tournament days, Friday 14th and Saturday 15th April, both Projects received two training sessions a day followed by a friendly game in the evening for each level. The objectives were achieved regarding the player’s tactics and overall fitness.

All the teams performed well in the tournament with every game being very competitive against strong/quality Portuguese teams.

Two of our teams reached the finals, Under 13’s A Team and Under 17’s.

The Under 17’s won the tournament for their age group playing two hard games, when we consider that our players were born in 2001/2 and were facing players born in 2000/1.

The Under 11’s team lost their first game on penalties (2-2 final score) and then won their second game 2-1 to finish 3rd.

The Under 17’s team played the last game of the tournament against Academico do Porto beating them 2-1 to win the trophy.

As a final remark, I have to say that these trips are proving that the preparation strategy we have been employing and improving on over the last nine years are succeeding in making our teams more competitive.