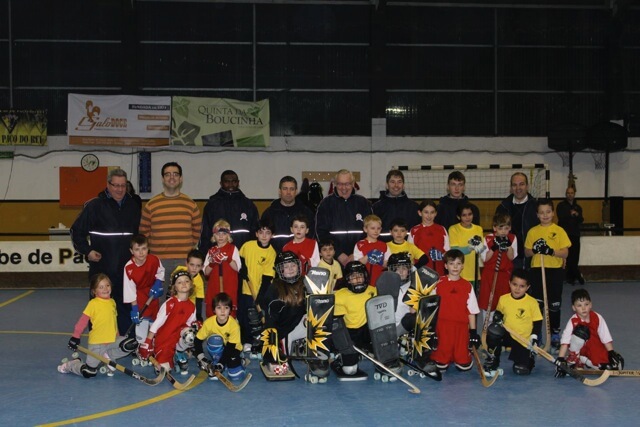 In a total of 72 people which included 33 players, 5 coaches, trip coordinator and 33 adults we travelled to Feira on Monday 17th February and returned on Sunday 23rd February.

We followed the set plan that we have put in place for our development trips to Feira which involves 2 training sessions per day followed by a game in the evening against Portuguese clubs. The plan for the trip can be seen here

I am very pleased to see the development of the players/teams during the week not only in their individual ability and team play but also in their confidence level when played in such big rinks and strong Portuguese teams.

We were pleased that our President, Keith Allen, arrived on Thursday to watch the last 3 days training/games.

Keith Allen made the following comments:

I was very pleased to see the standard of all our teams compared with the teams they played against.

It shows how important these trips are for our long term development when you see how well these youngsters perform on full sized rinks and against club sides who train together several times per week.

Comments made to me by some of the parents were very satisfying especially when they said how well the week was organised and how well Carlos and his Coaching Team worked.

Carlos, Michaela and the Coaches deserve our admiration and thanks for all that they achieved throughout the week.

From what I saw from teams made up from players of 5 year olds to 12 year olds, considering that the U9‘s and U11’s did not lose a game all week, the future of Roller Hockey in England is going in the right direction.

U17 Final Squad are training in Feira