So close to reaching the semi finals

England had great group stage performance and finished the group on equal points with France (7 points), losing out on goal difference as France had +8 compared to England’s +4.

England played against a German team that had only conceded two goals in their first three games. We set out our plan to play in the same way that we had done in the previous matches,  with good man to man pressuring the man with the ball. Building from a solid defence, we created good counter attacks and we managed to control the game.

The goalless scoreline at half time didn’t reflect our dominance, as we had more ball possession and caused the Germans lots of problems and they found it hard to reach our goal.


England had a fantastic second half very solid in defence and attack and we scored great goals.
We had lot of shots of which 80% of them were on target.

Today we play Switzerland for the right to play for 5th/6th place in the Championships.

England proved so far to be one the top four teams in the competition, but as I said to the players we need to be positive and carry on enjoying the competition.

I would like to thank everyone from Portugal, Spain and England for their texts, emails and phone calls congratulating our team.

Photos From The Match Against Germany 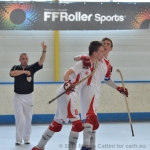 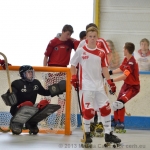