England didn’t play as well in this game as in previous games, showing signs of tiredness which affected our counter attack moves and final decision making when attacking the goal.

We dominated the game but our players didn’t have the power to finish some great moves. However the boys still worked hard helping each other out in defence.

We need to give merit to the Swiss team, as they defended very well, with their players always using the body and stick to stop our shots.

Finally I would like to say that I am very disappointed with some of the decisions made by the referees, which then had an influence on the result.

During extra time we should have been awarded a penalty, when Max Osborne was pushed in the area and then in another incident was pushed with violence against the barriers, which in the rules is a blue card offence and should be have been a direct free hit for us.

The golden goal came after a foul committed by the Swiss team on the half way line which the referees let play continue  giving advantage the wrong way.

I don’t like to make excuses when we lose a game, but it was obvious  that this game was influenced by the referees and this was reflected in the reaction of our supporters towards the referee.

You must login to vote 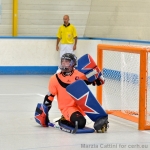 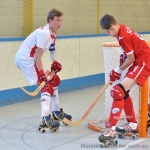 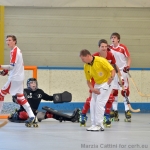