Following the success of the Lisbon Tournament in February earlier this year, the Youth Ladies Project has concluded its first week long trip to Santa Maria De Feira in the October Half Term. 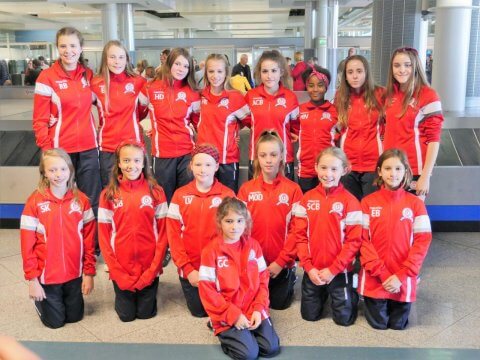 Attendance totalled twenty players from six clubs, ranging in ages from 2002 to 2009, including seven who had never travelled with an England Training Group before. Participants were ranged from National Training Level 2 to Level 5, but predominantly fell with Levels 3 and 4.

A total of nine training sessions were held throughout the week with players comfortably split into two ability groups. The intensity of the sessions was excellent, being a combination of fitness, team play and set-up exercises. A number of new exercises were introduced during the week adding additional dimension to the training. I provided both a planned and reactive, comprehensive training plan for the week, assisted by an Assistant Coach and members of our Senior Ladies, U17’s and U20’s teams.

Each evening the squad split into two ability groups to play 50 minute matches against local opposition. These included mixed U11 and U13 teams from Feira, Gulpilhares, Paco Do Rei and Cambra, plus a Select Girls Team from the Aveiro Region. Although match results were not important from a development perspective, there were victories throughout the week.

Excellent progress was seen over the week from individuals, plus some good understanding being developed from some player combinations. Both groups showed great potential for the future, suggesting there is a good basis from which to develop competitive girl squads.

Only a small number of girls were present in the mixed teams faced, so the Aveiro select team provided a good marker on our girls progress to date. The Aveiro teams included representatives from Sanjonese, Feira, Cambra, Viseu, CENAP, Mealhada and Bom Sucesso. England Youth Ladies won both games well, suggesting great progress has been made.

Feedback from both players and parents has been extremely positive towards the organisation, the coaching, the agenda and of course the enjoyment of the Hockey within this Youth Ladies Project trip.